Sheriffs met at the border 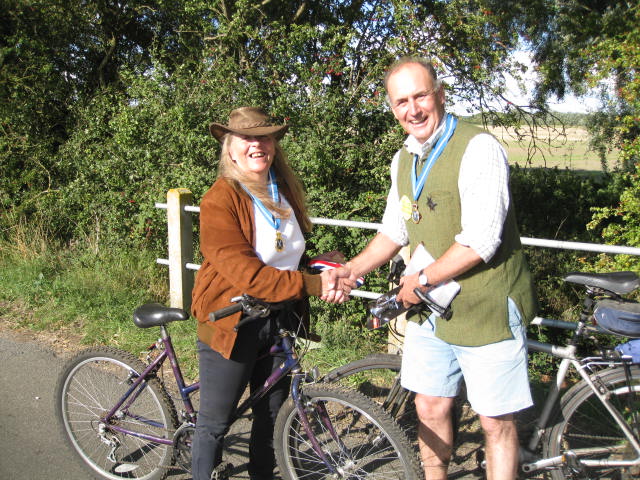 High Sheriffs of two counties met at the common border of their territories on 12 September. Jonathan Trower, High Sheriff of Hertfordshire met Isabelle, Countess of Errol, High Sheriff of Bedfordshire, near to Eyeworth, Bedfordshire.   They were not riding horses but bicycles, as part of the annual Bike ‘n Hike, organised by Beds and Herts Historic Churches Trust, nominated by both High Sheriffs as their chosen charity for the year.

The office of High Sheriff is the oldest secular office in England, like many of our churches, its origins go back to Saxon times.High Sheriffs support the judiciary, police and public services as well as being involved with other aspects of life in the wider community.

Entering into the spirit of the day, with hat and badge, the High Sheriffs shook hands across the line! Both were sponsored as part of their contribution towards this year’s Bike ‘n Hike, which is the major income generator for the Trust, enabling it to make repair grants to churches throughout the diocese. Also lending her support on the day was the Lord Lieutenant of Hertfordshire.

Results from Bike ‘n’ Hike will be published on the Trust’s website later in the year – http://www.bedshertshct.org.uk.

A big thank you goes out to the hundreds of Bike ‘n Hikers throughout the diocese.