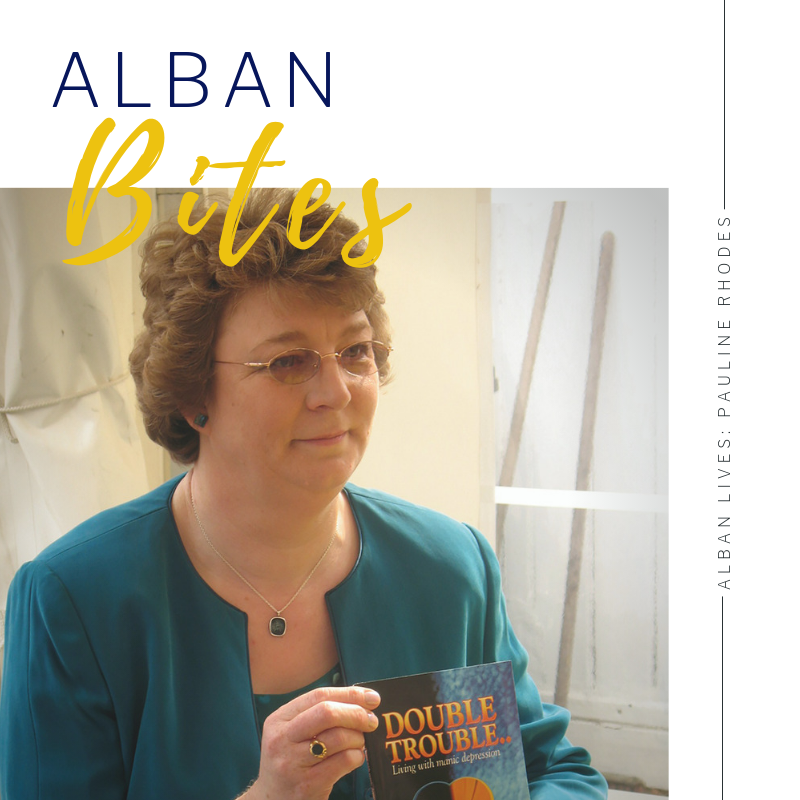 This article first appeared in issue 1 of Alban Life  (December 2018) – a quarterly printed magazine which is distributed to all parishes in the diocese.  Click here to read more articles from the ‘Alban Bites’ blog.

So what is it like to live with mental illness? Well for me with a diagnosis of Reactive Bipolar Affective Disorder or manic depression as I prefer to call it, it is a bit like being stuck in a glass lift. I can see life but there is an invisible barrier which I cannot overcome. I have no control over whether it will stop on the top floor and I will be manic or whether it will sink to the basement and I will be depressed. Either way or none it is claustrophobic. Even when I am well I can’t cry and neither do I laugh. I exist because of my medication without emotional extremes.

I hate all mental health labels. Through my illness I have experienced panic attacks; severe anxiety; obsessive compulsive disorder (albeit mildly) and when I have been psychotic, I have believed the television and the radio were talking to me. In fact the difference between me when I am manic and when I am depressed is so great that I have often wondered if I have multiple personality disorder.

So what’s in a name? It’s all mental illness which comes about when “your brain is playing tricks on you”. Here are some of my worst experiences of mental health units and some of my best.

Almost 23 years ago, I had just lost my father, quite suddenly, and was devastated. Lots of people arrived at my home and I was taken to hospital by two policemen because I was manic and they feared for my safety. I waited a long time with the police in A&E before I arrived at the psychiatric ward and then I waited, what seemed like forever, to be admitted. During this time, I did myself no favours by trying to escape from the police and activating a fire extinguisher that soaked one of the policemen. (This is the only remotely dangerous thing I have ever done, and I am not proud of it, but if you knew me you would realise that this was totally out of character and the act of a very desperate, manic woman).

Almost as soon as I was admitted, I was taken to a room and asked to take medication. I refused. In my recollection, before I had even been given a chance to discuss it, I was pinned to the floor by six men. My trousers were torn down and I was injected (with a sedative I presume.) I was still in shock from losing my father; I was terrified by the physical assault and I refused to get into bed. I lay on the floor spread-eagled feeling sick and giddy and convinced (in my psychotic mind) that I had been given a lethal injection. I remember thinking at least I could join my father and I went to sleep on the clinically cold grey floor thinking it was a mortuary slab.

Sometime later, I went to find a member of staff who simply said “Go back to bed and you will feel better in the morning”. I lacked basic clothing and toiletries and I remember thinking the illness had reduced me to a beggar and I felt like the lowest form of animal life.

I was only in the unit for a little over two weeks although it seemed like months, but during my stay I remember asking to see a Chaplain and have Holy Communion. I recall demanding this once in the middle of the night and being told in no uncertain terms “not to be so stupid”.

All of my requests were refused and in the end my husband rang the lady deacon from my church. The deacon was lovely. She treated me with gentleness and compassion and it was the most moving and beneficial experience of my stay. I met her in the Day Room but she was perceptive enough and judged me well enough to say “you don’t want to stay in a day room with the TV and all the smoke, we’ll go to your room and we’ll make a little altar on your table and light a candle and find peace” and she celebrated the Eucharist with me.

In the unit I was in, none of the staff seemed to know anything about me. No one seemed interested in talking to me and what the deacon offered was a much more holistic approach. She cared for me in a way that I didn’t feel the staff did. They were very brusk and dictatorial in my eyes.  She was very soft and gentle and motherly and I could respond to that approach much better.

Almost ten years later, following the death of my mother, I was sectioned again with mania. This time my admission was much better and the surroundings were much more homely and pleasant. I know I am very sensitive to drugs and I’m always scared to try something new, but again the staff seemed to feel I was refusing my medication and again the CRASH team arrived to subdue and inject me. This time, to make matters worse, I had a flashback to the last time which triggered a panic attack. I felt very claustrophobic and I recall screaming that I would have the injection if only two people were present and I did.

Again in my psychotic mind, the injection would be lethal. I remember saying out loud that my daughters (who were then 14) and my husband could cope without me and I would rather join my parents than live with my illness. Neither of the staff questioned my comments and I was injected and went to sleep, but this time it was on a bed in a pleasantly decorated room.

During that stay our elderly male Rector came to visit me and, much to his astonishment, I threw myself into his arms saying “Thank God for sanity!” He laughed and said “since when have I been sane?” and I felt safe for the first time in many days. Even when I am very ill, I know I need medication, but I also need a sympathetic ear and the chance to build rapport and trust with someone before I can take drugs and, in my case, when I’m ill, I trust members of the clergy.

Finally, in total contrast, in 2007 life was manic and I feared I would be sectioned. I went to see my GP, who was brilliant, and he called in my local Community Team. A lovely female Irish nurse arrived with a young Asian male CPN and they asked me what the problem was. I explained over a cup of tea and we discussed it all very calmly. They and my GP promised me that I would not be sectioned if I took my medication and I did and within a week I had responded and was feeling much better. As my GP wryly observed later: “sometimes you don’t need a sledgehammer to crack a nut!”

Pauline went on to find herself of great use to others with different challenges in life, including a technology-challenged rector for whom she became parish administrator. She also plays a significant and leading role in local mental health chaplaincy where her role as an ‘expert by experience’ helps to bring the kind of understanding and compassion to those who find themselves suffering mental ill health that she herself longed to find in the early  years of her diagnosis.

Whether for help with issues of mental ill-health for yourself or a loved one or for more information about individual projects around the country, these links and contacts will help.

Neither Alban Life, the Diocese of St Albans nor the Church of England are responsible for the content of external websites.