Bedfordshire Vicar to be Next Archdeacon of Ludlow 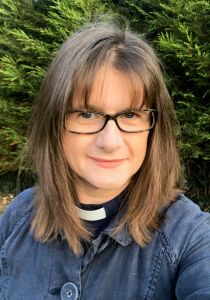 The Revd Fiona Gibson, Vicar of Cople, Moggerhanger and Willington, three rural parishes to the East of Bedford, is to become the next Archdeacon of Ludlow, in the Diocese of Hereford. Her appointment follows the retirement of the Bishop of Ludlow, the Rt Revd Alistair Magowan, who was also Archdeacon of Ludlow, at the end of April. Revd Fiona has been Vicar of Cople, Moggerhanger and Willington since 2014.

The Rt Revd Dr Alan Smith, Bishop of St Albans said: “Fiona’s leadership in her rural parishes has made a huge difference in the villages and churches and she will be missed. Although I and many others will be sad to see her go, her new role as archdeacon will see those gifts and abilities shared more widely. Her strategic and pastoral gifts will, I am sure, be a great support to the clergy and laity of the Diocese of Hereford.”

The Rt Revd Richard Atkinson, Bishop of Bedford, said: “Fiona will leave a huge gap in her parishes and in the diocese and will make an excellent and approachable Archdeacon with sound judgement, led by her passion for mission.”

Speaking on the announcement of her appointment, Revd Fiona said: “I’m excited to take up the role of Archdeacon of Ludlow, but sad to be leaving the church and community in these rural parishes in Bedfordshire which have been home to me and my family for the past six years.  As leave St Albans Diocese, I want to express my thanks for all the training and experience I have received here. It has been a particular joy to see the church here flourish and the church and people will remain in my prayers as they seek a new Vicar.

The Bishop of Hereford, the Rt Revd Richard Jackson welcomed the appointment and said:

“I am thrilled that Fiona will be joining us as Archdeacon of Ludlow.  This is a key appointment to our diocesan leadership team and the first woman to be appointed to the position of Archdeacon in Hereford Diocese.  She brings a wealth of experience and enthusiasm, proven expertise in education and demonstrable fruitfulness in mission.”

Revd Fiona qualified and worked as a teacher before beginning training for ordination just over 13 years ago.

Fiona was ordained in St Albans Diocese in 2011 and has served all her ministry in in this diocese.  As well as receiving her training here, Revd Fiona has been responsible for two curates in training. She also currently serves on General Synod, the Church of England’s elected governing body, various diocesan bodies, the Verulam House Fund Trust (awarding modest bursaries and project grants promoting education, spirituality, witness and service),  the Oak Hill College Council, Vice Chair of the national committee of The Junia Network (formerly AWESOME – a group for evangelical Anglican female clergy), sits on the Transformations Steering Group and is a member of the CPAS Council of Reference.

Her call to ordination was a long road, she explained. “It was a vicar who first mentioned ordination which I instantly dismissed. It took me nearly ten years to get there.  In the end it was my line manager who suggested during my annual appraisal that I look at ordination and encouraged me to think seriously about it. I was again extremely reluctant, but my resistance was futile – God always finds a way.”

Fiona will be moving to south Shropshire with her husband Dave early in 2021.  She and Dave have two young-adult children, both at university.

We hold Fiona and Dave and their children in our prayers as they prepare to move.