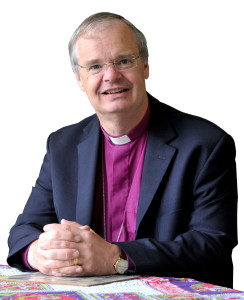 The Bishop of Bedford Richard Atkinson

In Blackburn it is football; in Birmingham it is spirituality and music; in Barnet it is ‘welcoming the stranger’; in Eastbourne the focus is peace; and in Scunthorpe it is a big conversation. Just a handful of the hundreds of events across the country where people are coming together from different faith communities to find commonalities, share what matters most deeply, ask questions, explore differences of view and join together for the common good as part of this year’s Inter Faith Week. Now in its seventh year the Week is growing in its reach as more and more groups participate http://www.interfaithweek.org/.

However, it is a Week, as we know all too well that this year has as its background the terrorist violence, with its death and injury, in Paris, Beirut, and elsewhere. There is a stark contrast between the neighbourliness of Inter Faith Week and the horror of extremist violence. It is not surprising that many question the contribution that our interfaith agenda can make; that for some it is no more than a cosy side-show.
Last Sunday’s Gospel from Mark 13 had Jesus preparing his disciples for the uncertainty that was to come both in society with the destruction of the Temple and for them as individuals as they faced persecution. Jesus understood the dangers of times when what seemed safe and secure was collapsing. In particular he warns his disciples against the false prophets who would seek to lead them astray. His message is ‘Beware no one leads you astray’.

At the heart of Terrorism is the desire to promote fear; that fear that magnifies the impact of their violence and which begins to distort our perspectives on the world. It is the fear that moves friendship into suspicion of our neighbour; that fear which turns the valuing of each person into crude stereotypes that over-ride the individual; it is the fear that undermines trust, narrows our perspectives and weakens community. It is sadly no surprise that my daily newspaper has as a front page headline ‘Continent on the edge as fear takes its grip’.

Inter Faith week is one part of the antidote to that fear. It is of course not the whole story, but those local events, up and down the country, are opportunities for the strengthening of local partnerships, the building of new friendships and the nurture of cohesive community. At their best they are also occasions where the hard questions are explored in a spirit of honesty and integrity. It is that love of neighbour that is Jesus’ command to his followers.

Earlier this week I contributed to a Vigil outside the Town Hall in Luton held to remember the victims of the terrorist attacks in Paris. I stood with colleagues from across the faith communities – Muslim, Hindu, Jewish, Sikh, Buddhist and others – alongside those from local government, the police, community organisations and other organisations in the town. There was a powerful sense of solidarity that was resolutely defiant of those who seek to undermine our society and in its commitment to strengthening the bonds of friendship. It is a partnership that has been built on successive initiatives to build relationships between the faiths; a partnership that has stood firm in the face of different shades of extremism, not least that of the Far Right.

‘Beware no one leads you astray’. Inter Faith Week is not a cosy agenda but the building of those relationships that enables trust to grow; of that resilience which inhibits the fragmentation of fear. We cannot, must not, let fear lead us astray.

– Today (19th November) sees the launch of the ‘Faiths Working Together’ Toolkit; a joint publication from the Inter faith Network UK and Near Neighbours.