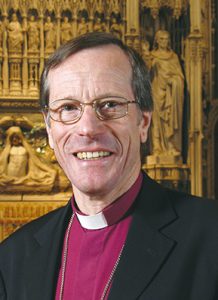 AS THE congregation filed quietly into St John’s, Walton, in Chesterfield, for the Rt Revd Richard Inwood’s funeral last month, a series of photographs of Richard were being projected on to the wall of the church: Richard as a young schoolboy, as a student at Oxford, as a young priest, at his wedding to Liz, with his three daughters and his beloved grandchildren, walking with Liz in the Peak District, signing his book about railways, and as a bishop confirming a parishioner. In each of them, Richard looked incredibly happy.

His smile, however, was not that of a celebrity posing self-consciously for the camera, but of a man who was entirely at home in his own skin: never showing off, never seeking the limelight, simply living out his faith unostentatiously wherever he was.

Inevitably, the photographs could not show all of his life: there was no photo, for example, of Richard enjoying opera; as a young graduate chemist; or leading a Bible-study group; nothing that could capture his deep and loving integrity and profound pastoral heart. Put simply, he was a great and good man whose love for his Lord shaped and formed all that he did and who he was.

Richard Neil Inwood, who died on 14 April, was born on 4 March 1946, in Burton-on-Trent, where his father was the company secretary of a brewery. He was educated at Burton Grammar School, and went up to University College, Oxford, to read chemistry, graduating in 1968. While in Oxford, he was a member of OICCU (the Christian Union) and worshipped at St Ebbe’s. It was a period of his life in which he made many firm and lifelong friends.

After graduation, he taught in Uganda, and, on returning, married Liz at Holy Trinity, Platt, where the Rt Revd Michael Baughen was the incumbent, and where he later qualified as a Reader. He then went to St John’s College, Nottingham, where Michael Green was the Principal. It was another important period in Richard’s ministerial formation. He not only graduated in theology from Nottingham, but also took a diploma in pastoral studies, in which Ann Long’s dictum about pastoral care — “Ears open, mouth shut” — stood him in good stead for the rest of his life.

A four-year curacy with the Revd Philip Hacking in Fulwood, Sheffield, followed, and he was then recruited to become director of pastoring at All Souls’, Langham Place, where Bishop Baughen had become the Rector. While there, he was asked by the Rt Revd Graham Dow to become a founding member of the influential Grove Pastoral Booklet series, and he contributed to its first publication, Biblical Perspectives on Counselling.

In 1981, he moved to Bath to become Vicar of St Luke’s, where his pastoral and teaching gifts were much in evidence. He was soon elected to the General Synod and served on the Crown Appointments Commission for the diocese. His wise and loving integrity were invaluable in that setting.

In 1989, he was appointed Rector of Yeovil and was made a Prebendary of Wells Cathedral. Just six years later, the Rt Revd Nigel McCulloch appointed him Archdeacon of Halifax. It was an inspired appointment; for, as the Rt Revd David James, the Bishop of Pontefract, said of him, “He was everything you wanted an archdeacon to be. He was a Barnabas, a good man, full of faith and the Holy Spirit, and an encourager.” During his time as Archdeacon, Richard was appointed as a member and then chair of the college council at St John’s, Nottingham; he was assiduous in his support for Dr Christina Baxter, who had been recently appointed Principal.

In 2003, the Bishop of St Albans, Dr Christopher Herbert, appointed him Suffragan Bishop of Bedford, in the diocese of St Albans. There, his honesty, hard work, care for his flock, and loving concern for colleagues and parishioners meant that he quietly and gently won the hearts of all who knew him. Dr Herbert writes: “He was a delight as a suffragan, because I knew that I could always rely on him for an honest appraisal of the diocese as he saw it. . . I loved him for his righteous integrity, because it was not driven by ego, but by his deep love of God in Christ. It was a righteousness that was never harsh or judgmental, and was characterised by grace. It was a privilege to work with him.”

It was during his time as a suffragan bishop that he was appointed Chaplain to the international Mothers’ Union, a position that he greatly enjoyed. It was also the time during which he co-wrote books about steam trains, which he loved.

On retirement, he was asked to lead (temporarily) the diocese of Southwell & Nottingham. It was a coda to his ministerial life which required all his qualities of wisdom and stamina.

Then came full retirement to St John’s, Walton, in Chesterfield, where he assisted through two vacancies. He and Liz could now spend more time walking in the Peak District and with their family.

Richard was a living example of the faithful soldier and servant, one who put on the whole armour of God, the breastplate of righteousness, and the belt of faith . . . and whose feet were shod with the gospel of peace.

He was a good and most lovely man of integrity and of deep faith, and the Church of England owes him much.