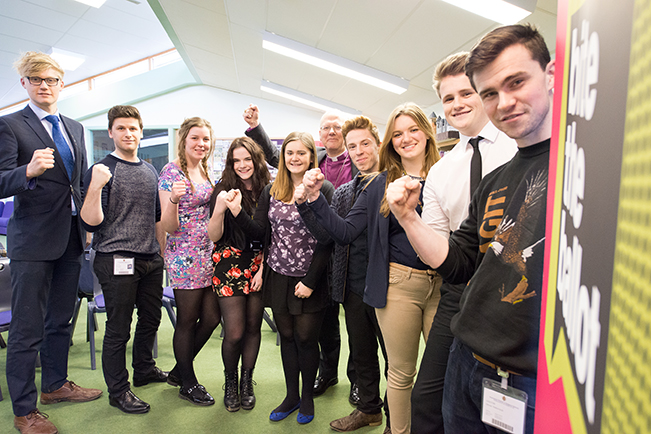 The Bishop of St Albans, the Rt Revd Dr Alan Smith, is calling on schools to help sixth formers approaching voting age to engage with politics and prepare to vote by joining the Register of Electors if they are over 16.

He says that all who seek the common good should engage with the political process.

To make his point, he visited a group of sixth formers at Townsend School, St Albans with Bite the Ballot, a not-for-profit movement that empowers young people to speak up, act, and make their votes and opinions count.

Bishop Alan joined in with about 60 sixth formers and answered quiz questions as well as creating a mock budget for all the things the nation spends money on in groupwork.

The quiz questions included “should sixteen year olds have the vote?” and “Should the death penalty be brought back?” to which the Bishop answered yes and no, respectively.

His attendance at the event was not the only action he has taken tochallenge young people to take a stake in their own future.

Last July he proposed an amendment, which was passed by the General Synod of the Church of England,calling on churches to “seek to increase the number of people voting in elections, for example, by hosting hustings and supporting National Voter Registration Day (5 February).”

During that debate, about marking 800 years since Magna Carta was sealed, the Bishop said: “We are living at a time of deep suspicion and scepticism and cynicism about politics, and it does not help when we, unthinkingly, join in always assuming the worst motives to politicians. It is a time when fewer and fewer people are engaged in the political process and are actually voting in elections. It is a deeply worrying development.“

Following the visit to Townsend school, he added: “As a Christian leader I am passionate about getting as many people involved in the political process as possible to seek the common good together through the ballot box.

“I was really impressed that the students engaged so readily when asked questions and given information. I was also really impressed by Bite the Ballot’s approach to helping young people to understand that if they want their concerns heard, engaging with the political process is a good place to start.”

Bite the Ballot said: “”Bite The Ballot is a movement seeking to inspire, engage and register to vote as many young people as possible. We believe in the power of face-to-face engagement in school, in showing a student the importance and benefits of being registered to vote.

“We thoroughly enjoyed welcoming Bishop Alan at a BTB session of “The Basics” (our democratic learning games) at Townsend and we hope that similar sessions could take place in all Church of England schools around the country, to ensure a generation grows up aware of their democratic rights and responsibility.

“We fully support the work of Bishop Alan to this end and all his work in the Diocese of St Albans.”

The last day for voter registration is 20 April.