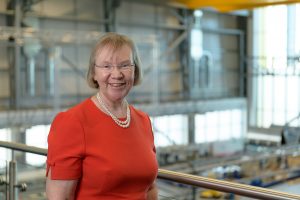 Among the Queen’s Birthday Honours announced on 12th June, a Bishop’s wife was made a Dame.

Professor Dame Helen Atkinson, whose husband is the Bishop of Bedford, is an engineer at Cranfield University and received the honour for services to ‘Engineering and Education’. Professor Helen Atkinson said: “I am utterly surprised and delighted. This is a huge honour. For someone from my background, with both parents leaving school at 16 and as the first in my family to go to university, this is a most amazing thing. “I am extremely fortunate to have worked with superb teams all the way through my career. I really want to pay tribute to all those colleagues, particularly the wonderful ‘This is Engineering’ team at the Royal Academy of Engineering who have made such an impact and the many dedicated and committed staff at Cranfield University who have worked so hard to serve our students and our industrial partners through the pandemic, building firm foundations for the future.”

The Bishop of Bedford, the Rt Revd Richard Atkinson, OBE, commented: “I am bowled over for the second time for the honour done to my wife, since she received a CBE in 2014. I hope she inspires many young women to consider more seriously how they might serve our society through STEM. Our family is also a magnificent embodiment of the harmony in which science and religion can actually exist.”

The citation published by the Honours Office reads:

Helen Atkinson is one of the UK’s foremost engineering leaders. She was appointed Pro-Vice-Chancellor at Cranfield University in 2017, with responsibility for the School of Aerospace, Transport Systems and Manufacturing. She has made a tremendous impact in this role, cultivating key strategic partnerships with major industrial companies.

She has been a Fellow of the Royal Academy of Engineering since 2007, serving variously as Vice President, Trustee and Chair of its Education and Skills Committee between 2012 and 2017. Most recently, she has made a vital impact through chairing the oversight group for the Academy’s ‘This is Engineering’ campaign to encourage more young people into engineering.

She has had roles with government Foresight Panels, HEFCE, EPSRC, IET, National Council for Universities and Business, and the Strategic Facilities Advisory Board of the Royce Institute. She is a leading role model and advocate for women in STEM. She was the first woman President of the UK Engineering Professors’ Council in its 50-year history.