St Albans Diocese has learned with great sadness of the sudden and unexpected death, on 5th September 2019, of Canon (Emeritus) David Cheetham MBE, Diocesan Registrar and Bishop’s Legal Adviser from 1978 to 2011. 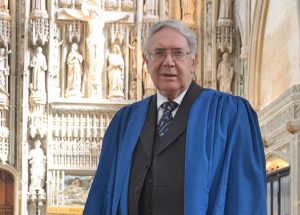 The Bishop of St Albans led tributes to David: “David was an excellent Registrar and servant of the diocese. His deep Christian faith undergirded all that he did. Many of us are grateful for his encyclopaedic knowledge of ecclesiastical law and the wise and thoughtful advice that he gave. David was deeply committed to his family, his community and his parish church. My prayers are with Doris, his widow, and his family and friends.

The Vicar of Redbourn, the Revd Will Gibbs added: “David was a lovely, generous spirited and warm man as well as a wise and insightful lawyer. He had as strong a Christian faith as anyone I have ever met.”

Before his retirement, David was made a Canon of St Albans Cathedral in 2010, to his evident delight. He retired in 2011 and continued to live in Redbourn. 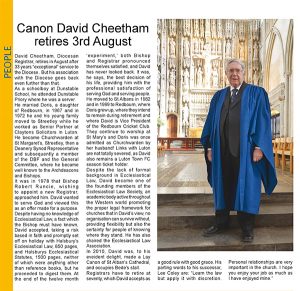 This article about David was published in See Round, the Diocese’s magazine, in 2011.

Funeral to be followed by Memorial Service

A Memorial Service will take place at 2:30pm on Wednesday, 6th November at St Albans Cathedral, to give thanks for David’s life and his role in the diocese and the wider church.