Money collected in the Diocese of St Albans has already been sent to the Caribbean, but more is needed and the Bishop’s Appeal for funds for relief in the Caribbean is still open. 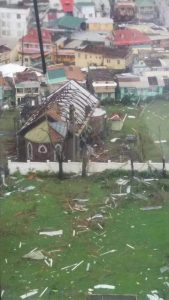 On Sunday, August 27, 2017, the Diocese of the North Eastern Aruba and Aruba concluded the activities in celebration of its 175th anniversary.  Over the period August, 2016 to August, 2017 each of the twelve islands in the diocese held activities to mark this milestone.  The celebrations which commenced in St. John’s, Antigua, the See City, came to a climax there also.  It was a joyous occasion.

With the theme of the celebrations, “Celebrating the past; seizing the moment; embracing the future” throbbing in our hearts, we moved forward with resolve to participate in what God is doing in the world in general, and our communities in particular.  Never in our wildest dreams did we anticipate that a few days later, several of our islands would be visited by two major hurricanes.

On Wednesday, September 6, the islands of Barbuda, St. Marten / St.Martin, St. Barthelemy, Saba, St. Eustatius and Anguilla were struck by Category 5 Hurricane Irma.  The winds of 185 miles an hour with spiral bands / gusts up to 230 / 250 m.p.h. were relentless.

The damage to housing, communications (at present I am using the facility of one of my parishioners), electricity, water and vegetation can only be described as catastrophic. The island of Barbuda has been declared uninhabitable.  Its residents have been evacuated to neighbouring Antigua.  Both the Government and citizens of that island are providing shelter and food for them.  This situation also has implications for the social services on Antigua.  Holy Trinity Church on Barbuda has been destroyed.

St. Maarten / St. Martin have sustained tremendous damage.  The airport which served as a gateway to the world and a major transit point for neighbouring islands such as St. Barths, Saba, St. Eustatius and Anguilla, is presently only accommodating aircraft with relief supplies for that island.  The seaports between St. Maarten / St.Martin and Anguilla are closed.  It is estimated that both the airport and seaports will remain so until mid October.

The Parish Priest, Fr. Terrence Rawlins has informed me that the two church buildings have been impacted by the storm.  Many parishioners’ homes have either been demolished or terribly damaged.

Reports from Saba and St. Eustatius indicate that both these communities have been similarly affected.

As far as Anguilla is concerned, it will take months before electricity and the public water supply are restored.  Luckily, most of the homes on Anguilla have cisterns (water catchments) from which water can be drawn.  The re-opening of schools which was due to occur on September 4th, then the 17th, has been postponed to a date in early October.  Some of the school buildings will have to be demolished.

Tourism, our main industry is in limbo as many of the hotels and villas are badly damaged.  We are facing a truncated Tourist Season 2017.  A large number of workers will face unemployment for months.

Several church buildings are roofless.  Let me interject here that most of the buildings on Anguilla are made from concrete blocks and have concrete roofs. The buildings with galvanize, galvalome or felt covering suffered the most.

As if Irma was not enough, some of the affected islands were dealt a double blow with the passage of another Category 5 hurricane… Hurricane Maria on September 18th and 19th.  This time, however, Dominica, another island in our Diocese, suffered the most.  Many houses, including church buildings have been destroyed.  Essential services, such as medical, are very limited.  So far, 15 deaths resulting from the hurricane have been reported.

In some villages, several persons are unaccounted for.   Mudslides make it difficult to  travel to some villages.  Such is the magnitude of the devastation that the Prime Minister of Dominica has appealed for international help in the form of helicopters, medical supplies, food, and tarpaulins.

Maria also caused damage on the southern side of Antigua.  Again, some homes have been compromised.  The three Anglican Church buildings in that area have either lost roofing or had windows blown out.

This situation where two major hurricanes, in quick succession have passed throughout our region is unprecedented.  Several of the islands have experienced many hurricanes over the years but none on the scale of Irma and Maria.  In spite of it all, we keep faith in a God who loves and cares for us.  Like as He has helped us to rebound in previous situations, He will do the same again and we will survive.

The cleaning exercise has begun and this is proving to be a Herculean task.  We need help in the form of chain saws, shovels, rakes, torch lights, gloves, battery packs, generators and building materials.  Where it is difficult to ship such, I recommend the financial contribution specifically designated for HURRICANE RELIEF should be sent.

(Contributions to the Bishop’s Appeal should be sent, cheques payable to ‘St Albans DBF’, to

St Albans Diocesan Board of Finance

Bank transfers may be made to:

If you or your parish sends a bank transfer, please send a confirmation email to: finance@stalbans.anglican.org

I assure you that assistance given will be gratefully received, acknowledged and faithfully applied.