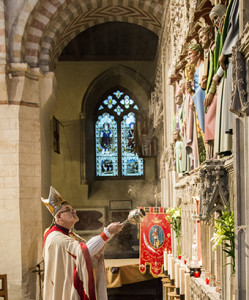 Richard, Bishop of London was present 900 years ago at the dedication of the new Norman buidling for St Albans Cathedral.

Bishop Richard Chartres, the present one, was present at the Dedication 900 service which marked that moment and saw seven new statues of Christian martyrs installed in niches in the nave screen at the cathedral. The seven martyrs start with Alban, Britain’s first saint and end with a late 20th century martyr, Archbishop Oscar Romero, Archbishop of San Salvador.

Below, See Round tells the story of these seven towering figures of our faith. 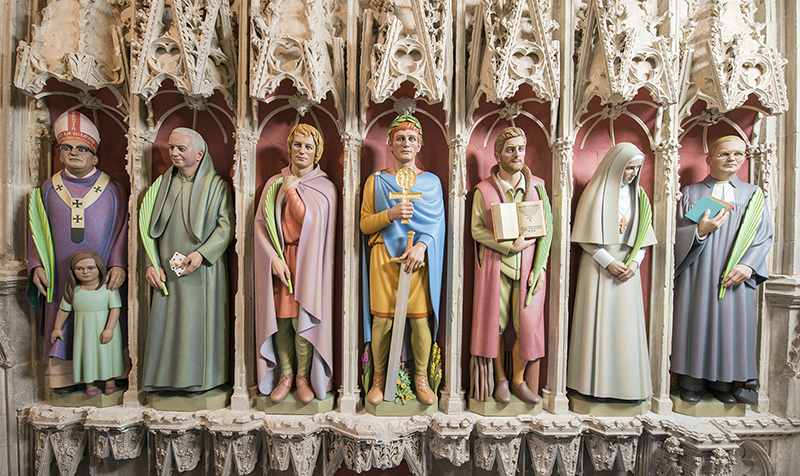 Archbishop Oscar Romero was a South American priest who became Archbishop of San Salvador in 1979 and who was shot while celebrating Mass in 1980. He had strongly opposed the treatment of the poor by the Government of El Salvador and the Junta which took over from the elected Government following a coup in 1979. He had foreseen the danger of assassination and had spoken of it often, declaring his willingness to accept martyrdom if his blood might contribute to the solution of the nation’s problems. “As a Christian,” he remarked on one such occasion, “I do not believe in death without resurrection. If they kill me, I shall rise again in the Salvadoran people.”

St Amphibalus was the priest sheltered from the Roman Authorities by Alban in third century Verulamium, for preaching Christianity.

St Alban not only sheltered Amphibalus, but gave himself in his place, and faced execution for his act.

George Tankerfield was a Protestant who was burned to death outside the west front of St Albans Abbey because of his refusal to accept the restoration of Roman Catholicism under Mary Tudor.

Sister Elisabeth Romanova was a member of the Russian Royal Family, granddaughter to Queen Victoria and convert to Russian Orthodox Christianity. In widowhood she became a nun and abbess and was murdered by the Bolsheviks in 1918.

Dietrich Bonhoeffer was a Lutheran Pastor and theologian who was imprisoned in a concentration camp for his opposition to the Nazis. He was tried without witnesses or defence and sentenced to death by hanging in April 1945, within days of the end of the Second World War. Among many memorable things he said, the truth of which lives on today was: “Silence in the face of evil is itself evil: God will not hold us guiltless. Not to speak is to speak. Not to act is to act.”