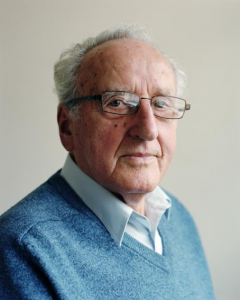 Their guest speaker,  born into a family of 11, was Ivor Perl BEM (right). He  was just 12 years old when he and his family were transported from a Hungarian ghetto to Auschwitz-Birkenau in Poland where 9 out of 10 were murdered on arrival.  The decision to lie about his age to Dr Josef Mengele at the selection line pointing him away from the gas chambers saved his life.

With the help of his eldest brother Alec and a series of chance decisions, the two brothers would survive the Holocaust. Not knowing the fate of his family Ivor wandered around the camp struggling on starvation rations and hiding between roll calls. As the camp was liquidated, he and his brother were transported to Allach concentration camp in Germany where as a slave labourer, working in extreme conditions, Ivor contracted typhus.  Hidden in the toilets by his brother, he once again escaped certain death.  Forced on a death march to Dachau concentration camp, Ivor and Alec were finally liberated by the Allies. With only each other, the now displaced orphans remained in Dachau for months, before emigrating together to England in November 1945.

Ivor was moved around the country until finally settling in London as an apprentice in the clothing trade. He went on to run a number of successful manufacturing businesses. He married in 1953, had four children, six grandchildren and two great grandchildren.  He was awarded the British Empire Medal in 2016 for services to Holocaust education.  Ivor gave evidence at the recent trial of Oskar Gröning, the former SS guard known as the “Bookkeeper of Auschwitz”.

Ivor said: “Did it have to take the lessons of the Holocaust for people to wake up and do something about it? I still can’t believe it happened and it’s happening again.  It’s not easy to talk about it, it will never leave us. It is a silent presence in our daily lives. But as painful as it is, and still haunted by our memories, we have to find hope and we have to go on and tell our stories.  We do it for all those who have lost their lives and for all those who have suffered in the Holocaust and later genocides and continue to suffer today.”

The theme for Holocaust Memorial Day 2017 is ‘How can life go on?’ It confronts the questions, how can life go on after genocide? How do people react after experiencing such unimaginable suffering and how can life continue after such trauma when so many others died?  The aftermath of the Holocaust and of subsequent genocides continues to raise challenging questions. HMD 2017 asks our audience to think about what happens after genocide and of our own responsibilities to help rebuild lives in the wake of such a crime.

This year, the event was hosted by The John Henry Newman Catholic School, Stevenage.   Created by students for students, a total of six secondary schools from the Hertfordshire area, took part using a variety of drama, film, music, art, dance, readings and poetry.  In addition, students’ art work and a permanent commemorative memorial was also exhibited.

‘How can life go on?’ challenged a 400-strong cross cultural and diverse student audience, the future generation, to consider our role in the UK towards individuals, communities and nations who have survived genocide, and to the displaced persons and refugees caught up in conflict situations. We considered how we could support them to learn from the past in order to create a safer, better future.  Holocaust Memorial Day is not only about commemorating past genocides and honouring those who died, but about standing with those who survive.