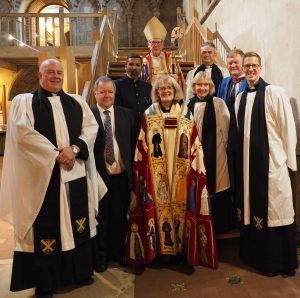 The new Honorary Canons are:

Rob Marshall is Rector of Digswell in Welwyn Garden City.  His early ministry was centred around communication. A former football commentator, he supported two archbishops, several bishops & dioceses and some charities with their communications strategies.  After almost 20 years presenting Pause of Thought on Radio 2, he switched to Thought for the Day on Radio 4 which he has presented for almost 15 years.
He is grateful for the support of his family, and the wider ministry team & congregation of Digswell Parish.

David Jonathan (Johny) was born into a north Indian Christian family. While studying in a Hindu faith School as a Christian minority, Johny confronted issues of identity & belonging. This prompted him to work, ecumenically through YMCA, with diverse communities in India. In 2001 he was invited by the Council for World Mission (CWM) & the United Reformed Church (URC) to develop inter-faith work in Luton. Since then, he’s been based at an ecumenical community initiative called GRASSROOTS in Luton, where in the last 20 years, in dialogue and partnership with the churches and different faith communities, Johny has developed a very creative multi-faceted inter faith programme in Luton, involving all sections of communities.

Jenny Gray taught history for seven years before becoming a full-time mother of 4 sons.  She became involved in church life at St Francis of Assisi, Welwyn Garden City and was then ordained in the Abbey in 2003.  She co-ordinated children’s work across the town and took a Sabbatical to write a resource book, RE Active Church, published by SPCK in 2012, to connect every primary school child with the Christian story.  In 2013 she came as priest-in-charge, then Rector, of what has become the Beane Valley Benefice.

David Kesterton has served for nine years in the parish of All Saints Luton. This Muslim majority community and a church with a proud Caribbean heritage has led to cross cultural and interfaith work locally, most recently as one of the diocesan interfaith advisers. Much of the work at All Saints in the last two years has involved the support of Asylum seekers temporarily housed in local hotels. This has brought a new and special dimension to church life. Prior to COVID he was also chaplain at Luton Town Football Club. He was previously with the Dunstable Team ministry but in between times has had a career in the voluntary sector embracing several subjects including youth homelessness, HIV support and running an innovative programme to help parents talk with their children about sex and relationships.

Richard Banham is Rector of St Helen’s, Wheathampstead.  He fell into a career in financial services by accident and ended up working as a project manager with Bank of Ireland.  To escape, he went to Uruguay as a short term mission partner with SAMS (now part of CMS).  This confirmed his call to church leadership and after a curacy in Wiltshire he moved to Wheathampstead in 2010 with his wife and two children. In Wheathampstead Richard loves working on projects with other partners in the local community to help God’s Kingdom grow.  He’s passionate about making church engaging and helping people encounter God’s love whether it’s through Messy Church, Evensong or midweek activities.

Julian Bowery has worshiped at the Cathedral for almost twenty years. He is a member of the Guild of Servers, of the congregational giving team, and until being elected a warden in May, was a Children’s Church leader.  All of his professional career has been in the public sector, either in local government or the Civil Service. He currently works for Innovate UK, a government agency, as manager for the East Midlands (which includes Luton and Bedford according to his employer!). He is also a Visiting Lecturer at Hertfordshire Business School.

Tony Boon (Order of Alban) was brought up in Enfield, North London attending church with his parents from an early age. Joining the choir at the age of 8, he subsequently become a server and taught Sunday School. He was appointed churchwarden at the age of 24.  Having moved to Hertford, he became Treasurer at St Andrews. He was appointed as Assistant Accountant at St Albans Diocesan Office; a job that lasted 28 years until retirement. He was particularly involved with helping treasurers and parishes understand how Parish Finances and the Parish Share worked.