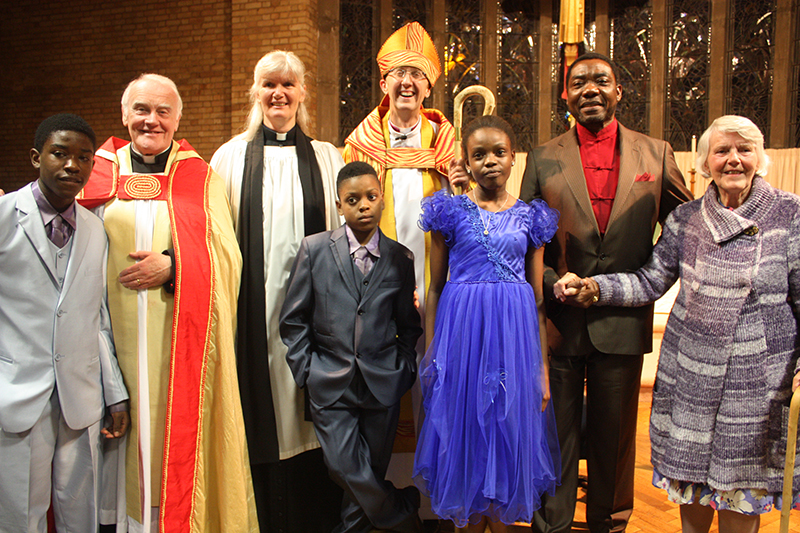 Monday, September 28th was a special day in the life of St. Michael and All Angels Church, Brook Road, Borehamwood as they welcomed Revd. Louise Collins as their new team vicar. The Bishop of Hertford, the Right Reverend Dr. Michael Beasley licensed her and she was installed by the Archdeacon of Hertford, the Venerable Dr. Trevor Jones.

Members of the Community, the Mayor of Hertsmere, Martin Worster, Mayor of Elstree and Borehamwood, Richard Butler, and clergy were invited to join the St Michael’s community in welcoming Louise, in a service which including prayer and hymns. Louise was then welcomed by both Mayors, The Deanery Lay Co-Chairperson Richard Osborn, Fr. Dominic on behalf of the Elstree and Borehamwood Christian Council, and Judith Elders from the local foodbank.

Members from Louise’s previous church St. Cuthberts, Fir Vale, Sheffield, members of Louise’s family and friends also attended the service which was followed by fellowship in the church hall.

PHOTO: The newly installed Vicar of St. Michael and All Angels, Revd. Louise Ridley Collins is joined by her family and The Bishop and Archdeacon of Hertford for a photo after her installation.
From left to right: Livimanjaro Collins, The Venerable Dr. Trevor Jones, Archdeacon of Hertford, Revd. Louise Collins, Jahudijah Collins, The Rt. Revd. Dr. Michael Beasley, Bishop of Hertford, Lioness Collins, Alpha Collins and Mrs Pamela Ridley.

This photo and the one on the front page, courtesy of Andrew Grady