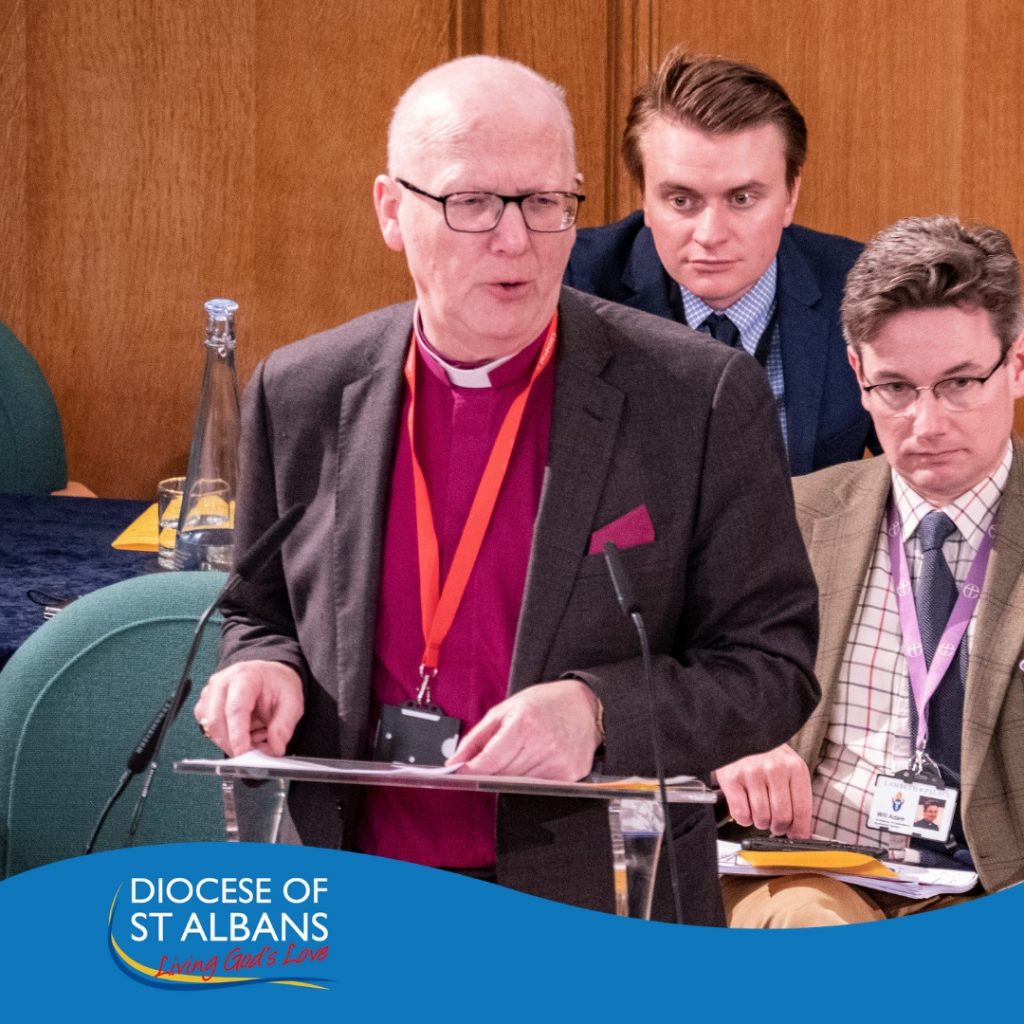 Some of the major debates and motions discussed at February’s General Synod were:

Prayer for Political Leaders: Members voted overwhelmingly in favour of a motion from the Archbishops of Canterbury and York calling for every parish and diocese to hold their local MPs, politicians and the members of the Government and civil servants in their prayers.

Gambling: A motion by The Bishop of St Albans, Dr Alan Smith was passed unanimously, calling for a reduction in gambling advertising, and to introduce a levy for gambling firms to help fund research and treatment programmes to combat addicting.  Churches were also called on to encourage members to write to MPs expressing their own concerns about gambling advertising (www.WriteToThem.com), to be vigilant and to report adverts that target children (www.ASA.org.uk/make-a-complaint) and to be places where people struugling over gambling can be pointed to help (www.NHS.uk/live-well). Bishop Alan told Synod that 55,000 children were problem gamblers, and were being ‘groomed’ by gambling adverts.

The story of Jack Ritchie, a young man who killed himself after fighting gambling addiction, elicited many stories from members of Synod of their personal experiences of problem gambling as well as those of loved ones. Some of these stories underlined the struggle felt by people with gambling addiction when they saw advertisments. Cards were distributed to Synod members, encouraging action by writing to MPs, reporting adverts to regulators and signposting problem gamblers towards the NHS.

Youth Evangelism: There was a debate about the future of youth evangelism in England, describing the current situation in churches as ‘shocking’.  Canon Mark Russell, Chief Executive of the Church Army, revealed that 36% of Anglican congregations have no one under the age of 16. Meanwhile only 6% of Church of England churches have more than 25 under 16 year olds and most of these are younger children. The challenges are particularly acute for teenagers with many churches having none.

Yet research suggests 13% of teenagers identify as Christian and many respond positively to the Anglican faith. Speaking from personal experience, Mark Russell said ‘I played pool with a 16 year old at Church Army’s Bradford Centre of Mission and asked him what becoming a Christian meant to him. He said that his whole life changed from black and white to colour’.

Social Housing Estates: Overwhelming support was given to a drive for a church to be set up on every significant social housing estate in the country as part of a programme of Renewal and Reform.  The motion urged all the dioceses to include evangelism on social housing estates in their strategies and clergy deployment plans.

The Bishop of Burnley, Philip North, who heads the Church of England’s Estates Evangelism Task Group, told the General Synod of the ‘transformative’ effect for both Church and nation of setting up Christian communities on social housing estates.  He told the General Synod debate: “So here’s the vision. It’s a very simple one. To have a loving, serving, worshipping Christian community on every significant social housing estate in the nation. To plant back in the estates we have abandoned, to better support our presence in the places where we’re struggling.  If we can do that, the impact on church and nation will be transformative.”

Family prayer in the home: Hundreds of thousands of school children will receive a free ‘prayer map’ as part of a new national commitment to children and young people’s ministry within the Church of England, which will focus on building confidence for families to pray at home.  A report by the House of Bishops, Growing Faith, was roundly welcomed, with dioceses and worshipping communities encouraged to adopt it at an early date.

In addition to recommendations for schools and churches, special resources will be made available to promote prayer in the home, and to increase the confidence of parents and guardians in encouraging prayer.

Motivating the Million: Plans to encourage the Church of England’s one million regular worshippers to be more confident in spreading the Christian message in their everyday lives were given the backing of the General Synod.  Members welcomed the campaign Motivating the Million aimed at helping congregations in speaking about and living out their faith in homes, communities and workplaces.

The plans include work to create more lay leaders in the Church of England and a project to help build the confidence of worshippers to invite their friends to church events.

The possibility of a standard tool to monitor CO2 emissions in churches, cathedrals and church halls will also be explored.

Pastoral Guidance relating to LGBTI+ people: The Church of England’s Pastoral Advisory Group launched its Pastoral Principles for Living Well Together at a presentation to General Synod.  The group was set up by a commission of both Archbishops in late 2017 with the task of advising local churches on pastoral guidance in relation to LGBTI+ people in the context of the Church’s current teaching. The diverse group comprises ten members, men and women who are clergy and lay people from a breadth of Church traditions and whose lives embody different positions on how to respond to same sex attraction.

The Pastoral Principles are a set of six prompts which invite church communities to consider and discuss their life together as a diverse community.  The resources focus on LGBTI+ issues but apply to wider issues of diversity. They have been commended by the House of Bishops. The Group hopes that the Pastoral Principles will be used by clergy and laity with responsibility for welcome and pastoral care in the Church, and as a resource for study groups.

Flexibility of Worship: Legislation was approved to increase flexibility for worship schedules in multi-parish benefices.  Synod voted strongly in support of changes allowing churches in group ministry to rotate services without explicit permission.  Existing legislation had required that Morning and Evening Prayer be said each day in every church and Holy Communion be held each week in every church.

Under the new legislation, the same services need only need be held in one church within a benefice, at the same regularity.  This normalises the already widespread practice of services moving from church to church within a benefice on consecutive days and weeks.  Such arrangements had previously required special dispensation from a bishop, which will no longer be required. It is expected that many parishes will still continue in their existing pattern of services.

Homelessness: General Synod backed a call for the Church of England to work closely with charities and other groups to tackle homelessness.  Members voted in favour of a motion to enable the formation of a Church of England-led task force on homelessness.  Andrew Gray, a General Synod member from the Diocese of Norwich, spoke of the ‘proud history’ of the Church in helping homeless people.  “There is much of which we can be proud – but we can and must do more,” he said.  He added: “In this age of political disenchantment, we must hold high the light of hope. In this age of bad news and fake news we must be the Good News.”

Working with other Christian Denominations: Members gave their overwhelming backing to new guidance which will help Church of England congregations to share mission and ministry more easily with a range of churches in their areas.  A code of practice will give guidance to bishops, clergy, lay workers and Church of England Readers on how to work more flexibly with other Christian denominations in their communities.

The vote comes after an overhaul of rules underpinning ecumenical relations was given final approval by the General Synod last year opening the way for parishes to take part in joint worship and share buildings with more churches than previously possible.  The new rules include churches without a large national presence which will particularly affect newer independent evangelical, Pentecostal and Charismatic groups.