Javaid Iqbal, Team Rector of Aldenham, Radlett & Shenley with special responsibility for Radlett, and Vocations Advisor (St Albans Archdeaconry) to be Archdeacon of Doncaster in the Diocese of Sheffield

Bill Britt, Rector of Stotfold with Radwell to be also Rural Dean of Hitchin

John Russell, Team Vicar of Berkhamsted Team Ministry to be Team Rector of the same

Wendy Carter, Priest-in-Charge of High Wych and Gilston with Eastwick to retire

Nick Grew, Vicar of Luton, St Francis to retire to the Diocese of Winchester

Dr Quentin Chandler, Rector of Marston Moreteyne with Lidlington and DDO, to be DDO in the Diocese of Oxford

Lizzie Hood to step down as Area Dean, Hemel Hempstead and to continue as Team Rector, Langeli Team Ministry

Joseph Pienaar, Vicar of St Hugh’s Lewsey, Luton, to be Church Planter, North Vancouver for the Anglican Network in Canada

Nigel Richards, Vicar of All Saints Dedworth in the Diocese of Oxford, to be Priest in Charge of Streatley

Simon Vivian, Curate in Berkhamstead Team Ministry, to be Vicar of Sawbridgeworth

Heidi Huntley, Vicar of Royston also to be Assistant Rural Dean of Buntingford

Didier Jaquet, Associate Minister (SSM) in Tring Team Ministry to be Assistant Priest (SSM) at Winslow (St Laurence) with Great Horwood and Addington in the Diocese of Oxford.

Stephen Tudway, Assistant Curate (SSM) at Flamstead & Markyate Street to be Curate-in-Charge at the Benefice of Broughton & Duddon and the Benefice of Kirby Ireleth in the Diocese of Carlisle

Gill Webb, Assistant Priest (SSM) at Marston Moreteyne with Lidlington instead to hold Permission to Officiate

We learned with sadness of the death of Mr Richard White in November 2019, Reader in the benefice of Riseley with Bletsoe.

Ian Smith Assistant Curate in training at Silsoe, Pulloxhill, Flitton (self-supporting) to be part-time Priest in Charge at Renhold

Valmor Pimenta, Vicar of St Martin’s Bedford, to be Vicar of St Joseph the Worker, Northolt, Diocese of London

Claire Towns Vicar of Swanmore and Associate DDO, Diocese of Portsmouth to be part-time Vicar of Sandridge and part-time Deputy Diocesan Director of Ordinands

We learned with great sadness of the death of Revd Gerald (Gerry) Booker on 10th September 2019, Rector of Bramfield with Stapleford and Waterford 1983-1996; also University Chaplain 1990-1996; who retired with Permission to Officiate from 1996.

Stephen Holroyd, Priest-in-Charge of Stodden Churches to be Rector on the end of suspension of the patron’s right of presentation

The Venerable Paul Hughes, retired Archdeacon of Bedford to be Archdeacon Emeritus

Paolo Di Leo, Assistant Curate in Training (SSM) at Streatley to be Rector of Sharnbrook, Felmersham and Knotting with Souldrop

We learned with great sadness of the following deaths:

Chris Briggs, Chaplain of Haileybury to be Chaplain of Shiplake College, Diocese of Oxford

Dean Henley, Rector of Campton, Clophill and Haynes to retire to the Diocese of Lincoln in November 2019 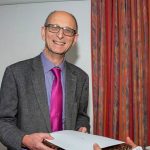 Martin Bishop retired as Financial Secretary to the diocese in June after nearly 20 years’ service, celebrated with staff and guests over tea where the Diocesan Secretary paid tribute to his long, selfless and dedicated service, motivated by his Christian faith and desire to use his professional skills in the Church’s service. Martin is moving to a role as Finance Manager with a charity based nearer to his home in Buckinghamshire. The charity, Medical Detection Dogs, which uses the power of the dog’s nose to detect human diseases.  Dogs have the ability to detect minute odour traces created by diseases.  As well as sharing his enthusiasm for this work at his farewell, he also spoke about his passion for ‘Parkrun’ and the benefits it brings. 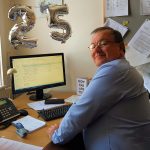 Tony Boon, Accounts Manager, celebrated 25 years dedicated service to the Diocese.  The Diocesan Board of Finance paid tribute to him at a recent meeting and presented him with a gift to mark the occasion.  Colleagues also made sure he was reminded of the anniversary, as pictured!

Glyn Barker has been appointed to the post of Director of Finance at the Diocesan Office and will be taking up his post on 27th August.

Kaushal David, Priest-in-Charge of Totternhoe, Stanbridge and Tilsworth to be Incumbent (Vicar) of the same

Barry Pate, Vicar of Wilbury is to retire in August 2019

Tim Vickers, Assistant Curate at Redbourn to be Associate Priest at Bushey

David Kesterton, Vicar of Luton, All Saints with St Peter to be also Area Dean of Luton

Nicola Lenthall, Rector of the Benefice of Kensworth, Studham and Whipsnade to be also Rural Dean of Dunstable

Jonathan Lloyd, Assistant Curate of Jarrow and Simonside (South Shields), Diocese of Durham, to be Minor Canon – Precentor of Cathedral and Abbey Church of St Alban

Gillian Smith, Rector of Potton with Sutton and Cockayne Hatley to retire in August 2019 to the Diocese of Norwich

Michael Trodden, Rector of Ampthill with Millbrook and Steppingley to retire in October 2019 to the Diocese of St Edmundsbury and Ipswich

Dave Bell, Vicar of Silsoe, Pulloxhill and Flitton to retire in September

Tony Halton, with Permission to Officiate in St Albans Diocese to be Assistant Priest at St Albans, St Saviour (self-supporting)

Cate Irvine, Co-ordinating Chaplain at Royal Holloway College, University of London, Diocese of Guildford, to be Team Rector of the Ouzel Valley Team Ministry and Vicar of All Saints Leighton Buzzard

Mary Kingsley, Associate Minister in Bushey to retire in May

Michael Leverton, Rector of Ardeley, Benington, Cottered with Throcking and Walkern and Rural Dean of Buntingford Deanery to retire in November

Theresa Musiwacho, Assistant Curate in Royston to be Rector of Little Berkhamsted and Bayford, Essendon and Ponsbourne

Pete Orton, Priest-in-Charge (Sacramental Pioneer Priest) Stevenage, All Saints, Pin Green to be Vicar on the end of suspension of the patron’s right of presentation

Hugh Symes-Thompson, Rector of Cranfield and Hulcote with Salford to retire to the Diocese of Truro

Sam Cappleman Associate Minister (SSM) at St Mark’s Church, Bedford and Assistant Rural Dean of Bedford, to be also Chaplain to the Bishop of Bedford

Quentin Chandler, Diocesan Director of Ordinands and Rector of Marston Moreteyne with Lidlington, to be also Honorary Canon of the Cathedral and Abbey Church of St Alban

Gemma Foster, Public Preacher in the St Albans Diocese to be Priest-in-Charge and Rector Designate of Cove, Diocese of Guildford

Jonathan Gordon, Rural Dean of Berkhamsted and Rector of Northchurch with Wigginton, to be also Honorary Canon of the Cathedral and Abbey Church of St Alban

Jane Mainwaring, Rural Dean of Hitchin and Team Vicar, Hitchin and St Paul’s Walden Team Ministry, to be also Honorary Canon of the Cathedral and Abbey Church of St Alban

Miriam Mugan, Vicar of All Saints, Croxley Green, to be also Honorary Canon of the Cathedral and Abbey Church of St Alban

We learned with sorrow of the death of John Bagworth, Reader Emeritus, on 1st December 2018

John Chitham, currently Chaplain to the Bishop of Blackburn, Diocese of Blackburn, to be Rector of Standon and the Mundens with Sacombe

We learned with sorrow of the following death:

Matthew Chinery, Diocesan Registrar to be Head of Legal Services to the Representative Body of the Church in Wales

Lucas Durant, Assistant Curate in Training at Wootton has completed his curacy

Lynda Klimas, Rector of the Benefice of Maulden to be also Rural Dean of Ampthill & Shefford

David Middlebrook, Vicar of Watford, St Luke and Honorary Canon of St Albans Cathedral to be Archdeacon of Bedford

Steven Wood, Vicar of Streatley to be Priest in Charge for The Burnhams Benefice, Diocese of Norwich

We learned with sorrow of the following death:

Paul Davies Senior Priest at the Anglican Church of the Epiphany, Qatar, Diocese of Cyprus and the Gulf to be Church Growth Officer (half-time) for Bedford Archdeaconry.  Also to be Priest-in-Charge (half-time), All Saints, Bedford

Bonnie Evans-Hills Vicar of Kimpton with Ayot St Lawrence is leaving the parish.

Robert Kozak Assistant Curate of All Saints Leavesden to be Priest-in-Charge of Letchworth.

Stephen Lyon to be Chair, Caribbean Links Group for the Diocese of St Albans

Austin Janes Team Vicar of the Church of the Resurrection in Grovehill, Hemel Hempstead has written and illustrated a Christmas poem resource for very young children, called Spider’s First Christmas.  Written in a very simple way reminiscent of Incy Wincy Spider, children can see that whatever changes come, God is travelling with us and we don’t need to be afraid.

The A6 booklet is printed in full colour and makes an ideal gift for nursery and primary school age children. The books are £1.50 each but bulk discounts are available. A power Point is also available for projecting in assemblies or services. contact Revd Austin Janes for an order form. All proceeds go towards supporting the ongoing ministry of the church in Grovehill and Woodhall Farm, 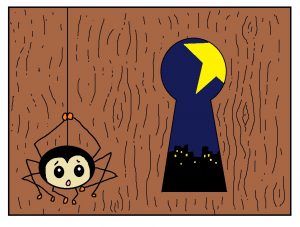 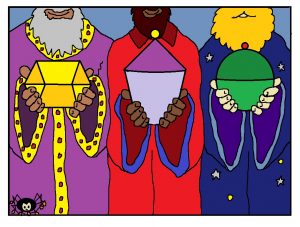