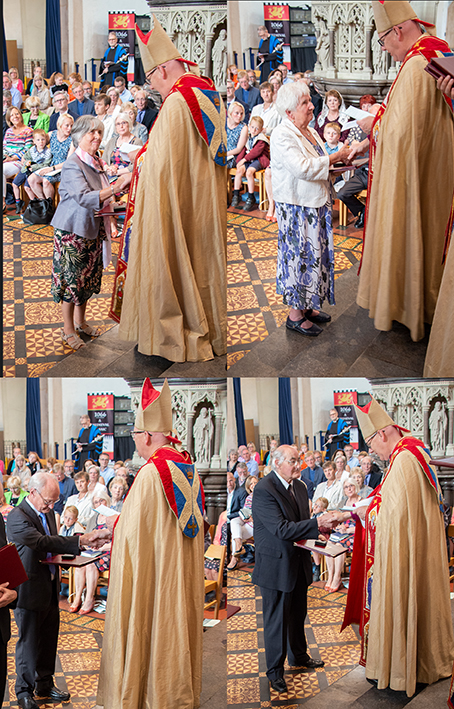 The Bishop of St Albans has recognised several decades of service given by four people, two from Bedfordshire, one from Luton and one from St Albans, with the award of ‘The Order of St Alban.’The four recipients, supported by friends and family and contingents from their churches were Helen Hutchison, Hannah Potter, Clive Richardson and John Wallace.

Born in Yorkshire, Helen worked in London for 18 years as a writer.

She was married at St Peter’s St Albans and she continues to serve on the PCC there. She has been a Long time member of the Diocesan Board of Social Responsibility, later the Board for Church and Society.

In 2000 she became Chair of the Diocesan Europe Group. High points were organizing a study tour by +Bishop Christopher of the EU Institutions in Brussels and being present at the inauguration of the Linköping link in Sweden.

In 2012 she took on the role of Diocesan Environment Officer and developed an extensive parish network.

Hannah first joined her Deanery Synod in Bedford in 1970.  A few years later she became the Deanery representative on the Board of Finance and was also on Diocesan Synod.

At various times since then she has been Deanery treasurer and Lay Chair.

She was a member of the Property Committee from 1989 and was briefly on the Education Committee. She also did a stint as the Bishop of Bedford’s secretary.

Hannah has also served as a trustee of St Etheldreda’s Trust, the Hockerill Education Foundation and the Verulam House Fund Trust.

Born in Luton, Clive has remained in that setting all his life, committed to his parishes, to the deanery and in the diocese.

As a verger, he has been present at some 450 weddings, including that of the late Duke of Westminster at St Mary’s Luton in 1978.

He was Lay Chair of Luton Deanery Synod for twenty years and overall he calculates that he has served the equivalent of 325 coterminous years in membership of bodies such as Bishop’s Council, Diocesan Synod and a diverse range boards and committees.

Born in Hereford, John taught in Northamptonshire before moving to Leighton Buzzard in 1983.

He has served at various times as Church Warden and has been on Dunstable Deanery Synod since the late eighties, acting as Lay Chair from 1992 until 2015.

He has been a member of Diocesan Synod for some twenty years and Lay Chair for over ten. He has also served as a governor in a number of church and community schools and was the first Chair of Governors of All Saints Academy in Dunstable.

John took early retirement in 2001 to undertake consultancy work as well as to free up more time for church activities. He is currently studying for a Doctorate in Theology and Ministry at Durham University.

The Order of St Alban was created by the Bishop of St Albans in 2015 as a means of honouring lay people who have given (and in most cases continue to give) faithful service to the diocese. A total of nine people are currently members of the order.

Each candidate receives a certificate and a copy of the Alban prayer in a binder and a silver plated medallion.