Over 400 sleep under the stars for eleven charities 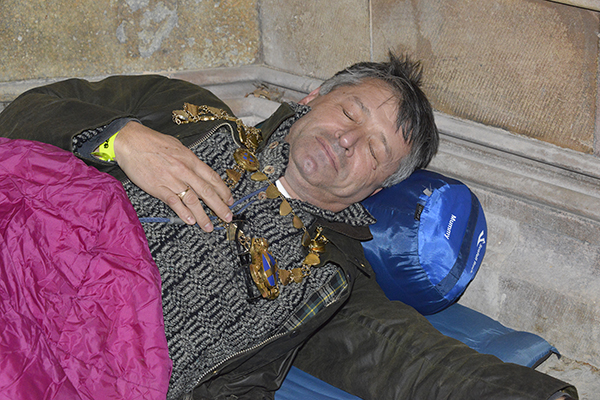 The Mayor of St Albans at the Sleepout

The 22nd Abbey Sleepout for eleven charities local to the Diocese of St Albans took place in probably the highest temperatures in the history of the event. Night temperatures of 10 to 11 degrees Celsius on Friday 4th December were however tempered by fierce winds, with a cooling edge – this was the night when other parts of the country experienced Hurricane Desmond.

Some sleepers reported difficulty getting asleep as the wind rustled through their plastic sheets and whistled around them.

The coordinator, Brian Peyton, said: “The event was again a huge success with everyone in good spirits. Just over 400 people slept out, the third highest number in the history of the event, and nearly half were under 18 years old.

“We of course will have no knowledge for some weeks of exactly how much sponsorship the event will have raised for the eleven homeless charities in Herts and Beds being supported, but we would hope for at least £40,000, typical of the amount now brought in each year. Last year the event raised over £58,000 when we had 470 sleepers.

“The event gives people an experience of what it can feel like to sleep rough, which increasing numbers of homeless people have to do. If you would like to send a donation to one of the Charities you can still do that by going on line at www.abbeysleepout.org where you will find details of the Charities taking part.”

Cllr Salih Gaygusuz, Mayor of St Albans City and District, said: “It was wonderful that over 400 people slept out to raise funds for homelessness charities. There were very strong winds throughout the night that kept trying to blow away the cardboard that people were sleeping on, but everyone coped with good humour and laughter. I was very impressed with the turnout and the atmosphere, which all go to show what a generous and charitable District we live in. Thank you so much to all those who slept out, to the volunteers who made it possible, and to everyone who donated to these deserving causes.”