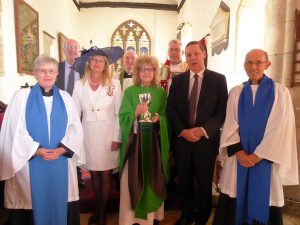 St Peter’s Church in Wrestlingworth has been engaged in restoration projects since the 1980s and “in recognition of this remarkable programme of restoration and repair over the years“, the church has been awarded the Coales Memorial Chalice to be held for one year. The award is made annually by one of the church’s benefactors, the Francis Coales Charitable Foundation, a trust which has regularly awarded grants from when the programme of restoration was launched in 1985 up to the latest project, the repairs to the Turret masonry, completed this year.

The award was presented at a special Service of Thanksgiving held at St Peter’s on Sunday 9 October. The service was conducted jointly by the Venerable Dave Middlebrook, Archdeacon of Bedford and the Revd Liz Lavelle, the priest in charge at St Peter’s. Guests included Mrs Susan Lousada, Lord-Lieutenant of Bedfordshire. The congregation was also joined by Trustees of the Francis Coales Charitable Trust and past and present clergy, representatives of the diocese and the deanery and the commissioned architect involved in the programme from 1985 to 2015, Bruce Deacon.   Mick Bister, Restoration Secretary described the diversity of fundraising activities organised which included a Pram and Potty Push, gastronomic dinners and choral and musical concerts.