In early November, we are starting  a new toddler group, not in one of our church buildings but on a housing estate at the opposite end of our parish. They story of how we have got to this point very much follows the Explore part of the RNP development cycle. 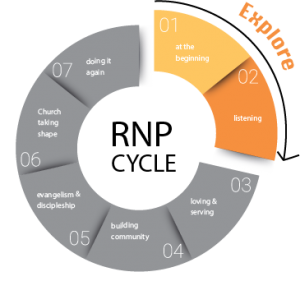 Combatting loneliness had been identified by our PCC as a priority and we had been identifying groups of people who often feel isolated. I remembered from my own experience as a new mum what a difficult  time of change and loneliness this can be, especially if the local toddler group has a long waiting list! I began to wonder if we should  start another toddler group in our church building…

In April, our church and its sister parish went for a weekend away and we held a mini Vision Day where we looked at maps of our parish to see what we noticed. The first thing that struck us was that the church buildings are now in completely the wrong place! It made perfect sense in 1870, but most of the population now lives in housing a mile or so away and a steep hill lies between them and the church. The biggest concentration is on a large housing estate with a mix of private and social housing. We acknowledge that not many of the folk who live up the hill come to us, so maybe we needed to go to them.

On returning home, the PCC decided to set up our own ‘Reaching New People team’ and a group of us looking at various new ways in which we can serve our community. We are listening hard both to our context and to God  as we weigh up various options.

I have run groups for young people of all ages, but never toddlers. However, the idea of a toddler group wasn’t going away and I began to wonder if this was God’s prompting. It was confirmed for me when I found out that our Curate, Wendy, was having exactly the same thoughts and the search for a venue on the housing development for older people, but felt sure that we had found the right place when the Church of England primary school invited us to meet there. 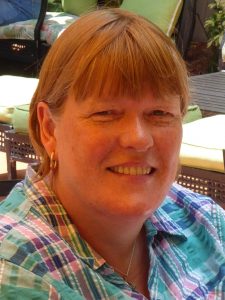 So we open our doors next week. Many months have been spent listening to our neighbours and to God and we believe it has been time well spent. We are now moving into the Integrate part of the RNP cycle –  Loving and Serving, and Building Community. We’re not sure exactly where this will take us but know that God will be with us every step of the way.