Members of local parishes in Luton were involved in a public act of witness and peace held in the town centre by faith leaders and activists commited to developing cultures of peace, especially addressing deprivation and serious youth violence. The vision for the event grew out of the experiences of local young people, parents and activists working to address these issues. The importance of highlighting youth violence involving knives was highlighted by an incident on the same day, when a 15-year-old was stabbed and left fighting for his life. 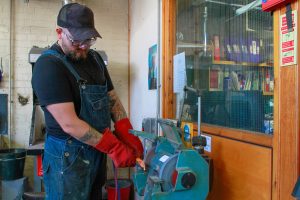 Several members of the core team who organised the events are part of Church at Seven, a fresh expression of church linked with St. Mary’s Luton. Josh, Jemimah and Joe, who help lead Church at Seven, joined pioneer ordinand Luke in crafting creative responses to the issue which has affected the town. This included a short film (https://youtu.be/E1rxuVfuOgs) , a sculpture, and an evening celebration held at St. Mary’s Church. Working closely with the St. Mary’s Centre for Peace, they were joined by clergy, readers and parishioners from across the deanery and beyond for a morning seminar which aimed to explore a discipleship shaped by the words of Christ. 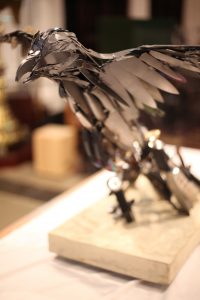 The Luton Phoenix was unveiled on the steps of Luton Town Hall and is made from knives from police amnesty bins across Bedfordshire. Those who attended the vigil were asked to participate in a corporate act of lament by silently washing their hands in red, symbolizing the shared blood on our hands.

Organizers of the day’s events also produced a short film detailing the construction of the Phoenix, intercut with statistics and quotes from young people that reveal the human cost of knife violence. The film was premiered on the large screen at the Luton Mall at the start of the peace procession. Later it was shown again at an evening launch event with Red Letter Christians UK at St Mary’s Church, where the Phoenix was blessed by the Bishop of Bedford. US activist Shane Claiborne (who has recently completed a #BeatingGuns tour across 37 American cities) participated in the day’s events and gave this message as part of the gathering:

“The stories of Jesus include the excluded and challenge the chosen.”

Numerous local organizations including Safer Luton Partnership, Walk to Freedom, Bedfordshire Police, Youthscape and various other local community groups were involved in the project. The hope is that this day will further catalyze positive initiatives to help bring peace and reconciliation in our communities.