The Church of the Good Shepherd – Growing Together. Growing Bigger. Growing Unity.

Six years ago, a Messy Church community in Leighton Buzzard had grown both together and in numbers to the point that they decided to develop into their own new church community. Having started in the vicar’s front room, they moved  to the community house, and today gather weekly in a local school.

A thriving Junior Church now includes a secondary school group, and while the young people are in the service itself, they play an integral part of worship. Age really doesn’t matter – everyone has a role to play, whether it is taking the collection or feeling able to just get up and dance to your favourite song (as one very tiny girl did). 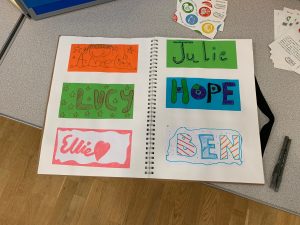 On arrival, not only are you warmly welcomed, but there is also the opportunity to add your prayers to the prayer book, which gets included in the intercessions. Next to the prayer book is the Book of Life in which each person has their name writ large and coloured in as they choose.

Having developed this new worshipping community, they’ve not rested. On the second Sunday of the month they take Messy Church to the nearby Sports Centre, Astral Park. While the players are outside on the pitch doing their Sunday morning training, inside the members of The Church of the Good Shepherd are there with breakfast, drinks, crafts, a story and perhaps a song. Parents, carers and siblings of those on the pitch often think they have stumbled upon a private party, but are soon welcomed and encouraged to join in.

In December, their Messy Church was a Christingle Service, and they held their second ever Beer and Carols event. Invites were sent to houses on the estate, a campaign on social media, and old-fashioned word-of-mouth, resulted in 110 people turning up – double the number from 2018, and around 50 who had no previous contact with Church of the Good Shepherd before. It was held the day after the General Election, and many said how wonderful it was to have an event which brought the community together.

Revd. Steve March, Vicar of Church of the Good Shepherd, said: “I think the chance to enjoy and sing along to the Christmas favourites was the light relief many were looking for.”

The event was organised by lay members of the congregation with craft beer from the local Leighton Buzzard Brewing Company. The church band played along with the local choir, “Raising Voices”, and the evening was compered by Stu, who runs the Messy Church (dressed as the Good Shepherd) and Revd. Steve. Aside from a great night for the community where people discovered church in a new way, it also raised funds for the Leighton Linslade Homelessness Service.

Feedback from those who attended included: “I’m really proud to say my church put on such an inclusive and joyous event” and “It was wonderful to see so many people and that created a good atmosphere.”

Planning for Christmas 2020 is  afoot with invites out for school choirs to sing their favourites, plus the addition of food.

The Church of the Good Shepherd has come a long way since Messy Church in the vicar’s front room. Their call to welcome and offer hospitality to all, added to their desire to simply try new things, is definitely reaching new people.