Revd. Joe Pienaar has been co-leading Sunday Night Football Church in Luton for the past six months. “All I wanted was a game of football” he recalls! When Joe arrived at St Hugh’s Lewsey 6 years ago he knew the church was looking to reach out to more men in their community, but he didn’t imagine gathering a few friends and friends-of-friends together for a kick about would be how this would happen.

Joe explains how the initial disappointment at not being able to book the football pitch across the road from the church led to unexpected conversations and the development of a new kind of church.

A New Kind of Church 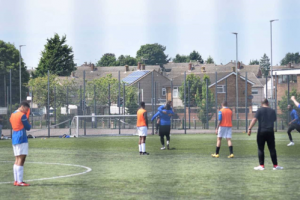 Joe says, “it take about 15 minutes to drive, but we didn’t realise actually that was going to be such a blessing, so a lot of the discipleship happens in the car to and fro; you know giving lifts to people, loads of question come up. And a few weeks into playing and growing a couple of the guys in different cars suddenly turned to me and my colleague and just said, ‘could we get baptised?’ And we were like – we didn’t even know you were a Christian, like you haven’t been to church, never been to church, and then it materialised in different ways that these people had kind of been on the road of discipleship themselves like watching YouTube videos and reading their own bibles and stuff like that at home, just really independently but were proper bonafide Christians and there was no reason not to baptise them. So we baptised three of them on Easter day from football church and we baptised another one last Sunday which has been really, really fun.”

It became clear to Revd. Joe that people were getting hungry for God. It wasn’t just football they wanted and there was a real growing sense of community. Joe says, “They really wanted to meet and so we started meeting an hour before to do some bible stuff, to share, pray, do some accountability, that kind of stuff and we now get probably around 14 or 15 of the lads come beforehand for that part and then about 22/24 that play every week – they’re different guys that play every week but 35 on the books, so a real kind of growing sense of community as well.”

How does discipleship happen here? 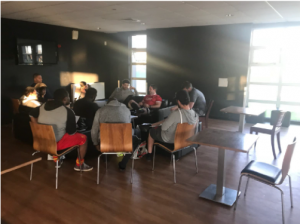 Each week the men spend time exploring scripture, considering how they can apply it to their everyday lives. Through their WhatsApp group, they encourage each other in this pursuit throughout the week –– occasionally meeting Joe individually for prayer – then gather on Sunday nights to share testimonies of how their lives are changing. These changes are evident both off and on the pitch, as new players are struck by the encouraging, supportive, yet still competitive on-pitch culture and want to know more. The church remains connected to St Hugh’s, with baptisms happening during Sunday morning services. Joe values this connection but as football church develops he is considering how other sacraments, such as communion, may play a part in Sunday nights.