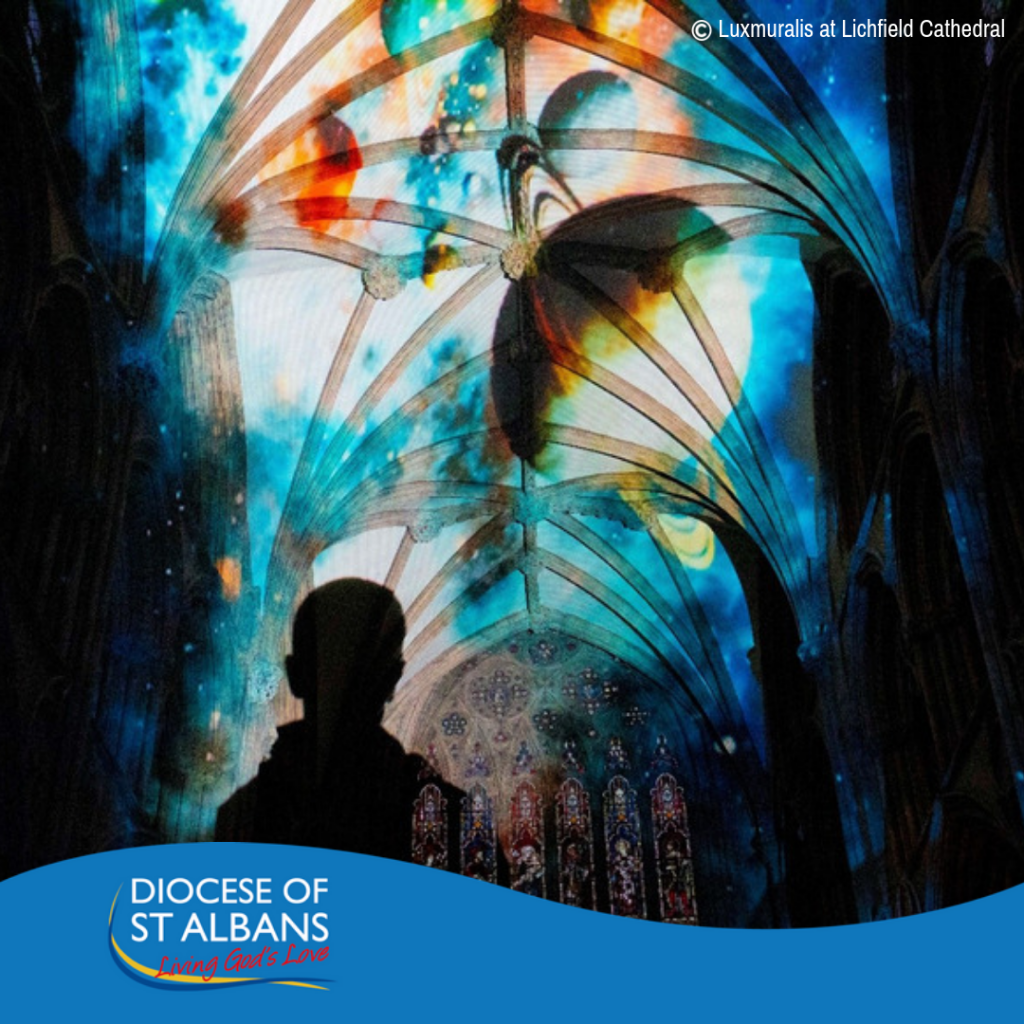 Walk on the moon at St Albans Cathedral: where will your ‘one small step’ take you?

“Cathedrals specialise in awe and transcendence,” says the Dean of St Albans, Dr Jeffrey John, and the Space Voyage installation coming to the cathedral this autumn could take that to a whole new level.

He continues: “They were built to remind us that we are small and finite in the universe, yet surrounded by the in- comprehensible grandeur of creation. A cathedral is just the place to contemplate the mysteries of space and the place of human beings within it.”

‘Space Voyage’ takes place from 28 October to 1 November and will illuminate both the exterior and interior of the cathedral, immersing visitors of all ages in a dramatic experience of light and sound. Produced by Artistic Collaboration Luxmuralis, the stunning installation sees the facade of the cathedral transformed into a visual journey to the edge of the Milky Way and back.

The longest nave in England will become an ethereal galaxy as light and music fill the huge, ancient spaces. And a special installation to commemorate the 50th anniversary of the first moon landing uses NASA imagery of the lunar surface allowing people to experience walking on the moon and take their very own ‘One Small Step’.

The Dean reflects: “A cathedral is just the place to contemplate the mysteries of space and the place of human beings within it. This is a spectacular, unmissable experience which will dazzle your eyes and expand your horizons to infinity. Highly recommended for earthlings of every age.”

Mass on the moon

As if that wasn’t enough, the day before Space Voyage begins, there will be a ‘Mass on the Moon’ on Sunday 27 October at 6.30pm. Sub-Dean, Revd Abi Thompson describes what it will be like: “Candlelit and incense-filled, the cathedral crossing floor will be covered with a Moon Mat allowing us to experience walking on the surface of the moon and to receive the body and blood of Christ upon it.”

This will recall events on the moon which have only become known this year, on the 50th anniversary of the moon landing but which were not released by NASA at the time. Abi continues: “On 20 July 1969 Apollo 11 landed on the moon. As the two astronauts waited to be given the signal to leave the lunar module and take the first ever human steps on the lunar surface, another ‘first’ took place.

Within the Lunar Module, sitting on the Sea of Tranquillity, Buzz Aldrin, an elder at Webster Presbyterian Church in Houston, took out the parcel carefully prepared before his departure from earth which contained the Sacrament: the body and blood of Christ.

Aldrin got on the comm. system and spoke to the ground crew back on Earth. ‘I would like to request a few moments of silence,’ he said. ‘I would like to invite each person listening in, wherever and whomever he may be, to contemplate for a moment the events of the past few hours and to give thanks in his own individual way.’

Then he reached for the wine and bread he’d brought to space—the first foods ever poured or eaten on the moon. ‘I poured the wine into the chalice our church had given me. In the one-sixth gravity of the moon the wine curled slowly and gracefully up the side of the cup,’ he later wrote. Then, Aldrin read some scripture and ate and drank.

As St Albans Cathedral prepares to go on its Space Voyage, come to reflect seriously about the universe we inhabit and to ponder its incomprehensible size and mystery.

Space Voyage follows on from the huge success of last year’s Poppy Fields installation by Luxmuralis, in recognition of 100 years since the Armistice. The installation art-work transformed the sacred space of the cathedral with sound and light artworks, sculpture and poetry, engaging with members of the public who may have never visited such sacred space be-fore. In Poppy Fields, giant poppies were projected onto the nave of the cathedral with visitors invited to walk through the poppies and be immersed in the light and sound, poetry read by Eddie Redmayne OBE. St Albans attracted 10,000 attendees over two evenings.

The installation forms the centre piece of a wider space-themed events programme at the Cathedral throughout October and November, including talks, music and children’s space themed trails.

Tickets are now on sale at www.stalbanscathedral.org