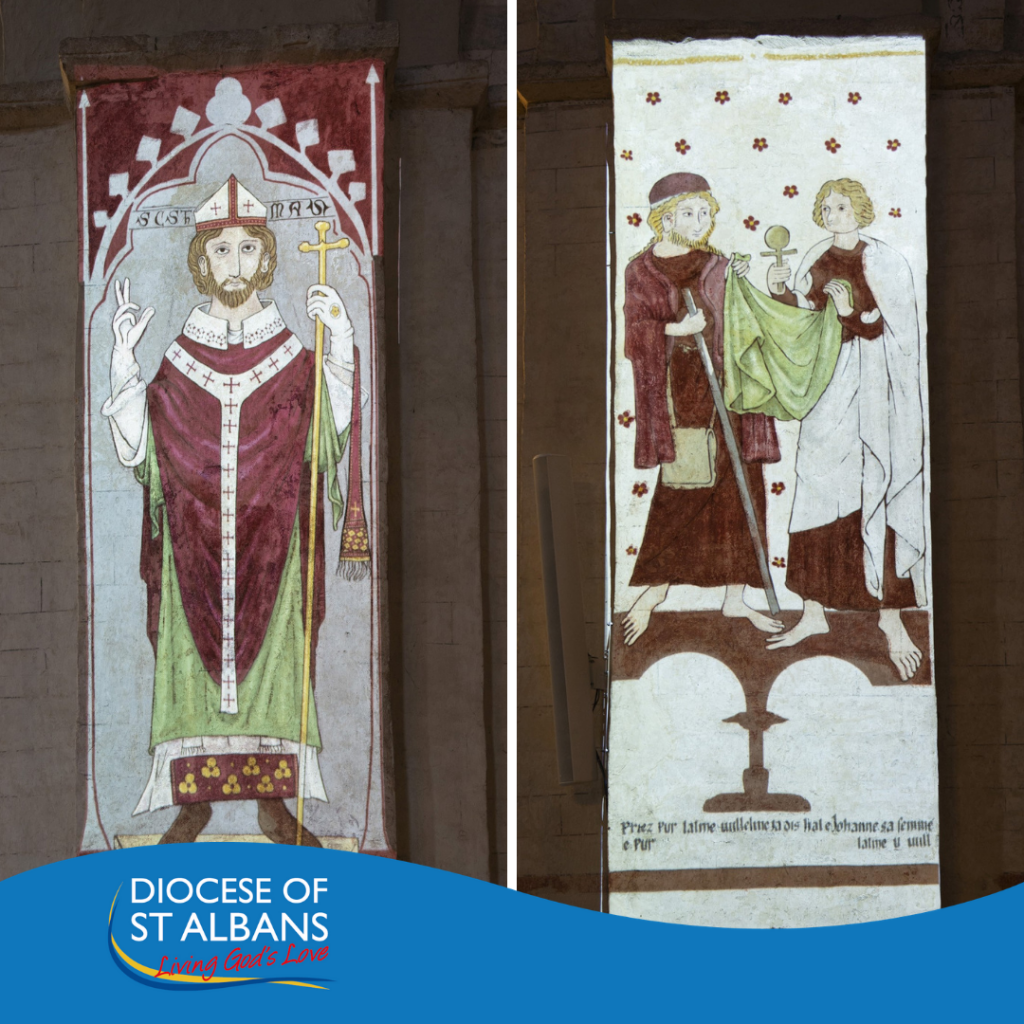 This autumn, visitors to St Albans Cathedral have the chance to be amongst the first to see the Nave of the Cathedral as never before as breath-taking light projections lift the veil of time and reveal how the south facing wall paintings in the Nave may have looked in all their medieval glory.

Dating from the early 13th to 16th centuries, St Albans Cathedral boasts one of the finest collections of medieval wall paintings in the British Isles. As part of the Cathedral’s landmark Alban, Britain’s First Saint redevelopment project, funded by the National Lottery Heritage Fund, two leading experts conducted thorough research into this collection, focusing on the four largest images of saints in the nave to digitally reconstruct. Professor Michael A. Michael (Professorial Research Fellow at the University of Glasgow) and Craig Williams (Head of Illustration in the British Museum’s Department of Britain, Europe and Prehistory) worked alongside the Chair of the St Albans Cathedral Guides, Julia Low, to bring this unique project to fruition.

Professor Michael says “The illuminations project is an example for other churches with fragmentary, damaged and vandalised wall paintings of how they can be brought to life again and how careful preservation of the surface of the wall painting can be taken to a new level of understanding (through the collaboration of art historians and archaeological illustrators) in order to interpret the surviving evidence and make it accessible to a wider public.”

Whilst the extent of the defacement to the paintings was significant, enough of the outlines remain to attempt to reconstruct them using archaeological techniques. In doing so, it has been possible to effectively build up the paintings’ histories from deep scratches and cross-hatching indicating where the paintings were defaced in the 1500s, to identifying where various colours were used, to the finer features of the saints’ faces and the iconography of the time. The end product of these various layers is a line drawing which forms the basis of the reconstructed illuminations. The line drawing was then recoloured, using reference colours from within the Cathedral itself as well as other historical documents, resulting in a series of clear, bright images reminiscent of the originals.

Craig Williams commented “Reconstructing the paintings proved to be extremely challenging yet ultimately rewarding. It involved in-depth research into the processes involved in the creation of the original medieval artworks. Ultimately, the results can be seen as a sympathetic recreation of the original artists’ work, allowing a fresh perspective on the fragments that remain.”

Remarking on the paintings, The Very Reverend Dr Jeffrey John, Dean of St Albans said “they are a unique survival and we have long wanted to lift the veil of time to see how the paintings might have appeared… Thanks to the generosity of the National Lottery Heritage Fund, we have been able to do this and seeing them helps us to understand why pilgrims of the Middle Ages are said to have fallen their knees in wonder.”

The wall paintings illuminations in England’s longest nave is just one in a series of autumn illuminations organised by St Albans Cathedral. Other events include a five night son-et-lumiere installation, Space Voyage, celebrating the 50th anniversary of the 1969 moon landings and the annual Fireworks Spectacular in Verulamium Park. Further information can be found online at www.stalbanscathedral.org