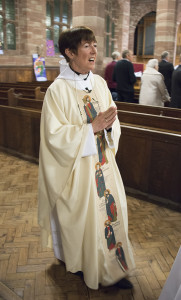 The Venerable Christine Hardman, who trained for the ministry on the St Albans Ministerial Training Scheme, is to be the next Bishop of Newcastle, Downing Street announced this morning, 2 September.

Christine later studied for an M.Th. in Applied Theology from the University of Oxford. She was ordained Deacon in 1987 and served her title at St John the Baptist, Markyate Street.

She took up the role of Course Director on the St Albans Ministerial Training Scheme in 1988 and was appointed Director of Mission Studies in 1991.

In 1994 she was one of the first women to be ordained priest in the Church of England and she became Vicar of Holy Trinity and Christ the King, Stevenage in 1996 and also Rural Dean of Stevenage in 1999.

She left the diocese in 2001 to become Archdeacon of Lewisham and Greenwich. She retired in 2012 and returned to live in St Albans Diocese.

As well as her MTh, she holds a BSC (Econ) in Economics from the University of London and among her interests she includes making connections between the worlds of economics and Christian faith.

Speaking about her appointment, she said: “I don’t really have the words to express my excitement at coming to this vibrant, warm and proud part of the world.

“From my own faith journey I know the key significance of warm, lively, welcoming church communities with worship that transforms us and sends us out into the world – bringing the depth of Christian hope to places where hope is thin on the ground.

“God cares about the world – not just about the Church. The rule of Christ is over the whole of our lives. That’s why it’s so important for Christians to engage and work with key partners for all that leads to the flourishing of communities. As Bishop of Newcastle I will take every opportunity to engage in the public square and especially to speak on behalf of those whose voices are not heard.”

The Bishop of Bedford, the Rt Revd Richard Atkinson, speaking on behalf of The Diocese of St Albans, said: “Many here in St Albans Diocese remember Christine with great warmth, affection and huge respect for her many qualities as a priest and teacher. I couldn’t be more delighted to hear her news and assure her of prayers for her new ministry as a bishop from this diocese.”